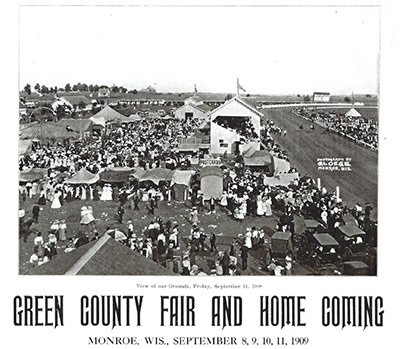 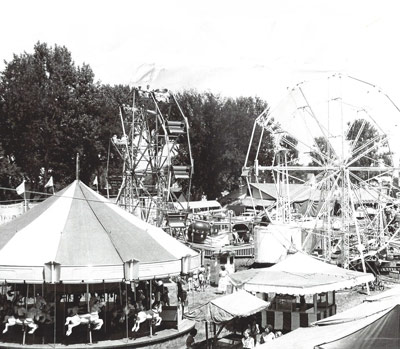 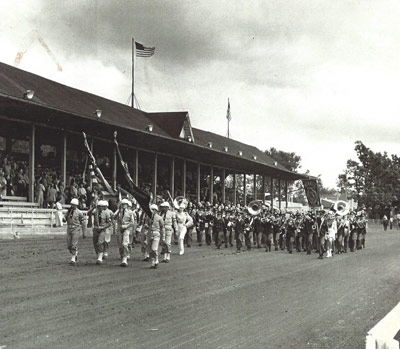 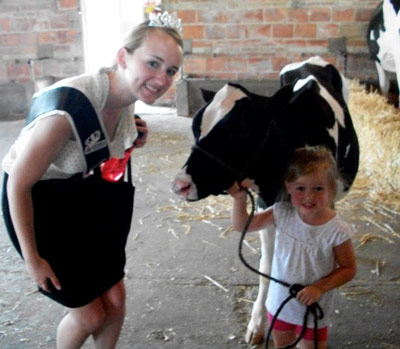 The historical account of the Green County Fair was compiled by Ken Allen using the following resources:

The organization of the Agricultural Society began on July 4, 1853 when a few people interested in a Society of this kind met in the old courthouse in Monroe, Wisconsin. The first fair of this Agricultural Society was held in November of 1853 at the courthouse. Premiums amounted to $100 and the majority of the exhibits were farm produce. Carnivals and amusements were not yet part of the fair tradition.

The person who should get the most credit for the organization of the Green County Fair was John A. Bingham. He was the first attorney in Green County after Wisconsin became a state. He also served as the first county judge.

In 1854 the Society purchased grounds just north of the village. The 7 acres were purchased from A. Ludlow for $400. In order to fence the area and build necessary buildings they issued “Life Member Certificates” for $10 a piece.

The 1854 fair, held on the new grounds in October, was the first outdoor fair. The sum of $200 was paid in premiums.

On March 31, 1856 the State Legislature issued an act for the encouragement of agriculture. This resulted in an extensive fair being planned for 1857. In July of 1857 the first meeting of the “Green County Agricultural Society and Mechanics Institute” as we know it today was held.

The original fairs, held in the autumn at that time, emphasized handicrafts in addition to agriculture, thus the need for “mechanics institute” in the title of the original organization. The importance of crafts which were apparent in Monroe's tin shops, blacksmith and shoemakers shops, even in the coffin maker's trade, should not be underestimated at these fairs.

In 1865 the grounds were sold to Christopher Martin for $105 an acre and a committee was appointed to secure a new location. Under the authority of the Society, the committee purchased two parcels of land in 1866. The first was from Arabut Ludlow on April 3rd. This area of 7 3/8 acres was purchased for $400. The second parcel of land was purchased from William Hodges. It consisted of 6 acres with a purchase price of $750. These plots of land were side by side on the east side of the village. This brought the total acreage to 13 3/8 acres.

The Jockey Club built a race track on the grounds in 1866. The exact length of the track is unknown, but it is believed to have been 1/2 mile. This track was too small to start races from a starting gate so, naturally, it limited the number of horses that could be in a race. A new 1/2 mile track was built in 1900 on the south side of the grounds running east to west. The present track has been rated as one of the top in the Midwest. Quotes from harness racers over the years and up to the present, rate the track as one of the best they've ever raced on.

A small grandstand that probably seated 500 people was built in 1886 for $1,485. In 1901 they added 180 feet to its length. This structure was renovated and repaired many times and was extensively rebuilt in 1948. This facility was used until the fall of 1972 when it was destroyed by a tornado.

Bands were important entertainment in the early years. 1868 the Society paid the German Silver Band musicians $50 for playing for events of the Green County Fair. In general entertainment was not provided, however, in 1874 Harry Leslie, “the Hero of Niagara Falls” entertained at the fair. He was the second man to walk a tightrope 1,100 feet across the falls 151 feet above the ground. His demonstration at the Green County Fair must have seemed like a cakewalk in comparison with his walk over the falls. The main entertainment in the early years was baseball games and bands from the area. The Albany, Warren, Monroe, Lena, New Glarus, and Brodhead bands participated in fair events for many years.

The 1909 Fair was one of most successful in the first 100 years of the Green County Agricultural Society and Mechanics Institute. Several firsts occurred at this fair – the first carnival and the first night fair. At a fair board meeting early in the summer of 1909 E. F. Carruthers of the United States Booking Association of Chicago presented to the board putting on a carnival as the main entertainment for the fair. This show, traveling in its own train of 12 cars, would be the largest aggregation that had appeared in Monroe up to that time. Mr. Carruthers stated that they would have several free acts and would charge admission for such rides as the Ferris Wheel and the Merry-Go-Round. The other part of the carnival would include such acts at Wild West shows, theater presentations, and the human roulette wheel.

Monroe horsemen had three of the best racing horses in the nation. This started out with George Bleier's great Chestnet stallion, Knight of Strathmore. In fact, Knight of Strathmore was so good that he had a hard time getting any competition for racing at the Green County Fair or any other fair in the area. He was so feared that the Green County Fair could not fill the race because he was entered. After considerable discussion and due deliberation it was voted to bar Knight of Strathmore from the race. However, they offered him $100 for an exhibition race each day. This was providing that he break the state record for 3 year olds on a 1/2 mile track on Friday and the world's record on Saturday of the fair. He made a track record of 2:09 1/2 to beat the record of 2:11, but, was indisposed the next day and did not try to set a world record. Knight of Strathmore set the mile world record in Monroe in 1910 as a four year old of 2:05 1/2. He held this record throughout his lifetime.

There are currently 366 members. 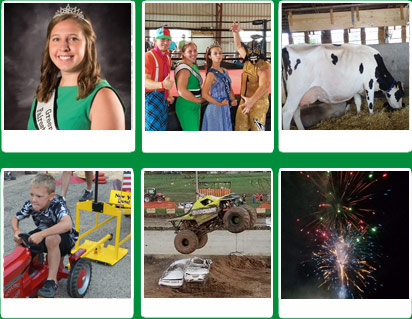